The fourth world kingdom of Daniel: worldwide democracy!
DISCOURSES‒OUTLINE  Are all religions equal? – the position of Biblical Christianity.


Behold, the Lord GOD will come with might, With His arm ruling for Him. Behold, His reward is with Him And His recompense before Him. Like a shepherd He will tend His flock, In His arm He will gather the lambs And carry them in His bosom; He will gently lead the nursing ewes. (Isa 40:10-11)

Remember the former things of old; for I am God,
and there is no other; I am God, and here is none like me,
declaring the end from the beginning
and from ancient times things not yet done,
saying, My counsel shall stand,
and I will accomplish all my purpose. (Isa 46,9-10)

There are all over the world a great number of exegetes, who deal with the interpretation of the altogether 66 books of the Bible. The majority of them treat a particular one of these books; some few have set themselves the task to represent the overall connection of all prophetic texts of the Bible. Also this paper can be counted as one of the latter group. In contrast to single interpretations, where one can deal with one book after another, an overall interpretation requires an exhaustive study of all books of the Bible in order to acquire a general knowledge of the focal points and connections first. Only after this it is possible to decide which texts from which book belong to which subject. And for that a purposeful study of the entire Scriptures is necessary once again. By proceeding this way it is also possible then to support the interpretation offered by parallel passages from various books of the Bible and to comply with the old-established principle of a reliable exegesis that only Scriptures shall interpret Scriptures.

In conventional interpretations these parallel passages are quoted with their addresses of origin – that is to say for instance Isa 52,7 for: book Isaiah, chapter 52, verse 7. But as one can easily imagine, there is only a very restricted readership that take the trouble to look up the text in the Bible every time. In most cases the readers trust the indications and go on reading. But with that one often does not only renounce an essential help for a better understanding, sometimes it also turns out that this connection with other texts does not make any sense. Either because the interpreter sees here a connection that obviously does not exist at all or quite simply because the indication of the source address is wrong.

As the paper on hand here deals with the prophetic texts of the Holy Scriptures as a whole and as due to the complexity of the matter the reader should get all possible support, all parallel texts were directly inserted – to the extent necessary for the respective analysis. The fact that as a result of that the number of pages of the individual sections was extended quite considerably, was accepted for the benefit of the advantage that the reader disposes of an immediate opportunity to get the information right away and also to check what message can be derived from this passage from the Scriptures for the subject which is being dealt with at the moment.

The first part of this paper comprises the excursuses 1-12. In each of these excurses a controversial subject of the exegesis of the Bible is taken up and analyzed. These excursuses are independent of each other as well as independent of the main part. However, reference is made in the main part to the respective excursus by means of footnotes when these subjects are being dealt with.

The second part, the main part, deals with the last days in its chapters 1-14. The subject matter of the individual chapters is based on both the preceding and the subsequent chapters and therefore, they form a logical connection, which can be inferred from the general survey at the end of this section.

The third part contains the tables (first table portrait, all other tables landscape). These tables are in the main working documents, which are intended to help to reconstruct the analysis. They are also independent of the main part and of the excursuses, however, also in the excursuses reference is made to the tables belonging to that subject by means of footnotes.

At the end of this introduction the hyperlinks to all documents are indicated in a table of contents.


General survey of the periods and the events in the Last Days.

The tribulation of those days
1st seal: The first Antichrist

The beginning of the woes:

The return of the Son of Man
The Rapture: the raising up of the dead in Christ and their take off with the living ones
The sealing of the 144,000
The faithful of the Rapture in heaven


The Day of the Lord
The plagues of the trumpets 1-6
God's two witnesses
The 7th trumpet
The two witnesses of God killed by the raised up Antichrist / The fall of Jerusalem
The dominion of the second, demonic Antichrist
The day of the wrath of God


The New Creation
The new heaven and the new earth / There is no longer any sea
The heavenly Jerusalem / The tabernacle of God among men
The city has no need of the sun or of the moon to shine on it.
The glory of God illumines it, and its lamp is the Lamb / There is no more night


On this web site - as it is the case with most major web sites, search engines, etc. - anonymous and non-personal data are gathered by third parties on a server exclusively for statistical purposes. By means of these data statements can be made such as for instance how many visitors from what country (if indicated) visited what parts of the web site how often. These data provided by the visitor, however, do not contain any individual information by the help of which individual visitors could possibly be identified.


When direct or indirect references are made to other Internet sites ("links"), which are beyond the sphere of responsibility of the author, a liability would only come into force in that case when the author has knowledge of the contents and if it were technically possible for him and if it could be reasonably expected of him to prevent the utilization in the case of unlawful contents. Therefore, the author expressly declares that at the time when the links were set the respective sites, which were linked, were free of illegal contents. The author does not have any influence on the current and future arrangement and on the contents of the linked/concatenated sites. Therefore, he herewith expressly dissociates himself from all contents of all linked/concatenated sites, which were altered after the links had been set. This statement applies to all references and links set within the Internet supply of the author as well as to entries of other persons in visitor's books, fora for discussion, and mailing lists which were set up by the author. Solely the provider of the site to which reference was made can be made liable for illegal, incorrect or incomplete contents and in particular for damages caused by the utilization or non-utilization of information presented in such a way, and not the person who purely and simply refers to the respective publication by means of links.


CONDITIONS ON USE OF SITES


You may use, copy and distribute the contents of Immanuel.at Web site for non-commercial, informational purposes only provided the Web site and author are mentioned.
Except as authorized in this paragraph, you are not being granted a license under any copyright or intellectual property right in the materials published on these Sites. The provider of Immanuel.at and/or third party owners of rights retains all such rights.

o  Nowadays many churches call themselves "Christian". First and foremost the hypocritical Catholic Church, which practices idolatry through the worship of the dead ("saints" = death cult) and the Catholic "Maria" (not identical to the biblical Maria, the mother of our Lord!) and therefore should be counted among the pagan cults.

o  Then also the Protestants / Evangelicals, who among other things also appoints unrepentant homosexual bishops and therefore cannot be counted among biblical Christianity.

o  Going on from this we find Adventists, Baptists, Mennonites, Methodists, Pentecostals (charismatic movements), Jehovah's Witnesses, and so on - all these claiming to be Christian religions. They all have various unchristian excrescences, but essentially there are three differences between all these religions and true biblical Christianity.

o  First of all, they are all religions with liturgies (from the Ancient Greek λειτουργία (leiturgía), meaning "public service"), whereas biblical Christianity is not a religion but a relation, a connection. A connection or relationship between each individual biblical Christian and his or her God.

o  So biblical Christianity, secondly, does not have any liturgy (public service) either; instead, in this spiritual community of faith each individual member has his or her wholly personal contact in spirit with our Lord Jesus Christ and with God, our Father in heaven. This is the God we worship in spirit and in truth.

o  And finally, the third distinguishing feature of biblical Christian belief, which separates us from all other religions, is faith in our Lord Jesus Christ, as the one and sole mediator between God and human beings. Through this faith in the Son of God we also have access to the Father, and in honoring and loving the Son, we honor and love the Father at the same time.

o This biblical Christian faith is the one true access to the Father of our Lord Jesus Christ and to the one and and only God of the Bible. God the Father has given all power in heaven and on earth to the Son. Hence any religion which does not proclaim the Son of God as the sole savior and judge of humanity, as the central tenet of its faith, is a false religion, and should be seen as an attempt to keep people away from true faith in the living God.

God can be reached by any individual human being who desires it.
Not in the various different religions, however, but in his Son Jesus Christ.

Any religion that does not put Jesus Christ, as the Son of God and sole mediator between God and human beings, at the center of its faith is a false religion. 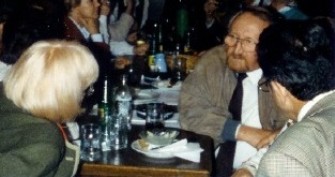 Recommend   THIS   DOCUMENT   by email